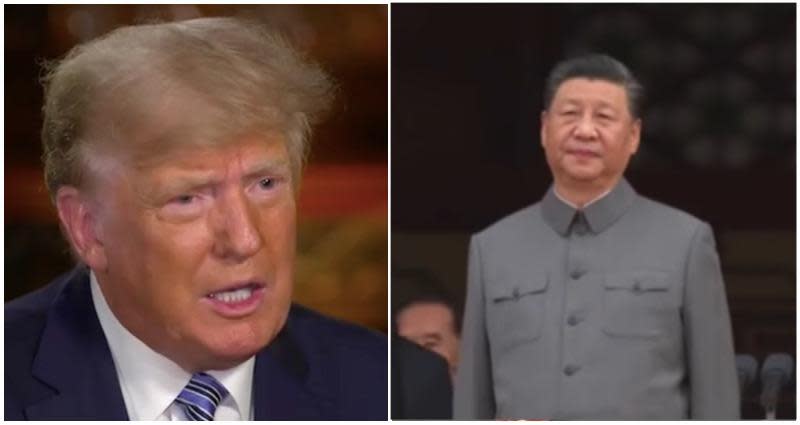 Former President Donald Trump said in a recent Fox News interview that Chinese President Xi Jinping is a “killer” who “destroyed the world” after the way China handled the COVID-19 pandemic.

“He is a killer,” Trump said, agreeing with “Sunday Morning Futures” host Maria Bartiromo on Sunday. “But I had a great relationship with him.”

Trump claims China has become a “threat” from an “economic and military standpoint” and following the rise of the pandemic.

Trump also claimed that Biden is “afraid” of Xi and has not pressured authorities to find out the origin of the pandemic.

Trump has previously pointed a finger at the Chinese government alleging it created COVID-19 in a lab before releasing it into the world.

Despite Trump’s claims, he told Fox News that the U.S. should not boycott the upcoming 2022 Winter Olympics in Beijing to avoid making the America look bad.

This led to the Soviet Union and its allies to boycott the 1984 Olympics in Los Angeles.

Trump had praised Xi on his now-suspended Twitter account in January 2020 for a trade deal that “will bring both the USA & China closer together in so many other ways.”

“Terrific working with President Xi, a man who truly loves his country,” he added. “Much more to come!”

Trump tweeted in March 2020 that he spoke with Xi about the pandemic.

“Just finished a very good conversation with President Xi of China,” he tweeted. “Discussed in great detail the Corona Virus that is ravaging large parts of our Planet. China has been through much & has developed a strong understanding of the Virus. We are working closely together. Much respect!”

In response to Trump’s interview with Fox News, China’s Foreign Ministry spokesperson Zhao Lijian said on Monday that the former president is “to blame” for the thousands of deaths of Americans from the pandemic.

“No matter how hard some hypocritical politicians try to divert attention and shift blame, they will not change the fact about their disregard for people’s life and health and botched epidemic response,” Zhao said. “Trump’s repeated scapegoating will only remind people who should be the first to blame for all these miseries.”

The spokesperson also responded to Trump’s allegations that China is “ripping off” the U.S. economy, calling it “just nonsense.”

“Since the establishment of diplomatic relations, cooperation between China and the U.S. has brought enormous benefits to both peoples,” Zhao said. “The China-U.S. economic and trade relations are mutually beneficial in nature. In fact, the U.S.’ oppression of Chinese enterprises amounts to exploitation that undermines the market economy principles and international economic and trade rules.”